CARE started in a number of HOAs, but we are far more than that. CARE welcomes any community group, individual or organization that shares our concerns. As for the makeup of our membership, we are, like America, a patchwork: Some of us are retired; others work. Some own their homes:  others don’t. Some of us have local roots that go back for generations; others are relatively new to Florida. We represent many faiths  and points-of-view. This extends to our political views, which span the range from Blue to Red, and persuasions in between. The one thing we all share: a deep and abiding respect for the quality of life that we have come to expect, and greatly enjoy, as Floridians.

We’re not just a bunch of “rich people” trying to get special treatment. This is not a class issue; it’s a quality of life issue. And not just for CARE, but for the 10 million-plus Floridians who live by and around the proposed AAF route. This includes, many low-income communities and federally-subsidized schools (Title I) that are located right next to the train tracks. Those who seek to denigrate our efforts by drawing false class distinctions are just trying to avoid the issues that CARE and many others have identified. We are not taking the bait, and we hope you won’t, either.

We don’t dislike trains. In general, we think trains are good for Florida and good for America. But that doesn’t mean train owners don’t have an obligation — and a community responsibility — to be good neighbors. Our beef is with rail expansion that is incompatible with the communities that have grown up along the tracks.  Some of our elected leaders understand and respect our concerns. Others are aligned with powerful railroad interests and are ignoring our concerns.

AAF’s public explanations are misleading. The AAF web site is awash in facts, figures and stock answers to questions that really don’t matter, like who will use the service (“a robust mix of domestic and international visitors”), projected train schedule (“hourly throughout the day”) and cost of a train ticket (“still being determined, but it will be competitive with other current modes of travel” — whatever that means). But AAF is silent or downright evasive on substantive issues that actually matter, like: How will additional train traffic — AAF and freight — impact first responders? Title I schools – How is it possible to quadruple train traffic and not impact students? We could go on, but you get the idea: AAF is playing dodge-ball with issues that matter.

We believe the public and the press are a lot smarter than what AAF seems to think. Consider AAF’s claim that trains can be “synchronized” so that North-South trains pass by each other at railroad crossings at exactly the same moment, lessening wait times for people stuck at gate crossings. In theory, it’s a fine idea.  In reality, not so much. As any engineer can tell you, all it takes is a single train delay — in any direction — to throw off the entire timetable. Likewise, AAF’s insistence that the project is fully funded by private money, with no input from us or Florida taxpayers, is pure fantasy: As of this writing, AAF is seeking a subsidized federal loan that will cost taxpayers millions every year… for three long decades. Up and down the line, AAF is also shifting the cost of maintaining and equipping gate crossing

We think AAF should stop parsing words and information. Case in point: AAF’s “investment-grade ridership study.” Conducted in the third quarter of 2012, AAF says the study found that “almost 74 percent of our riders will be leisure travelers,” and another 26 percent will be business travelers. Question: Is that 74/26 split comprised mostly of Floridians? Or are we talking mostly out-of-state visitors (tourists)? As for raw numbers, how many people are projected to actually use the trains – near and long term? AAF’s response: Nada. AAF has refused to release the study publicly. Nor will AAF provide meaningful context for the few numbers it has released. Why so mysterious? If the study is such a glowing affirmation of the benefits of AAF, why won’t officials release it so that we, the people of Florida, can draw our own conclusions?

We are all in favor of bringing “benefits” to Florida, so long as the associated costs, fees and penalties are also considered. AAF claims it will bring a laundry list of benefits to our state. Among them: job creation, growth for small businesses, revitalization of downtown areas, reduction of road congestion and, over time, environmental benefits. We say: Prove it.  As with many sweeping programs, the reality is in the details. On that point – providing meaningful details — AAF has been remarkably, and consistently, silent. Example: Job creation. AAF claims the project will create 10,000 jobs. But what kind of jobs? And for how long? Railroad projects typically result in the hiring of new workers – you need a lot of muscle to get through the construction phase. But once that’s done, so are those jobs. Likewise, AAF claims the new train will shave 30-50 minutes off the approximately four hours it currently takes to drive between Orlando and Miami. Is that time savings realistic?  Even if it is-and we doubt it-does that sort of time savings warrant a multi-billion dollar train project? And more to the point, perhaps, does a small time reduction for a few people matter when compared to the adverse impact of expanded rail – passenger and freight – on the millions of people who live by and near the train tracks?

Safety is one of our top concerns. We’ll boil this down for you: AAF and freight rail expansion could wind up adding more than 60 trains to the Florida East Coat Corridor, every single day. Passenger trains will travel at speeds of more than 100 mph . Freight trains will go slower, but they’ll also be a lot longer – there’s no limit on the number of cars in a freight train, which is why some of them are exceedingly long, almost two miles in some cases.  And yet, AAF claims that rail expansion – passenger and freight – will have no impact whatsoever on safety issues. As in zero. That’s despite the fact that high-speed trains have shorter horn warning times, and shorter operator reaction windows.  An operator in charge of a train barreling down the tracks at 110 mph has just 8 seconds to identify a problem and decide on a corrective course of action. And don’t even get us started on the inherent dangers of “double-tracking,” which is when two trains, going in opposite directions, use the same track to reach their destination. (AAF plans to rely on double-tracking during the construction phase.) AAF’s public stance, once again: No safety problems. Not so in our view.

We view AAF’s claim that the train will be “good” for Florida’s environment as both true and false. (But mostly false.) We get that anything that gets cars off the road, lessening our carbon footprint, is a positive for the state. But to say that AAF is actually “good” for the environment just runs counter to common sense. Please tell us: How is construction of new track facilities in a state park good for anybody, much less the environment? We’d also point out that there are plenty of ways to lessen carbon outlay if you’re so inclined: Car sharing services, existing trains, motor coaches and electric vehicles top our short list. We also favor using fuel-efficient barges to move the tons (and tons…) of limestone rock the Federal East Coast Railway (FEC) currently piles onto local trains and runs through our communities.

We don’t pretend to have all the answers.

Bottom line, we are simply a collection of people who care – about our neighborhoods, our communities and our state.  That’s not a riff on our organization’s name; that’s just a fact. And we are confident that by bonding together we can positively influence the outcome. And in the process do a whole lot of good, not just for our neighborhoods – but for the 10 million-plus Floridians who live near, by and around the state’s train tracks. At the end of the day, for us, that’s what really matters. 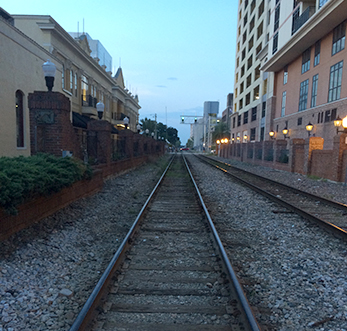